I’m happy to republish a very interesting piece written by my colleague @AmyJColgan who is a Social Media Analyst at DG COMM in the European Commission. This post was originally published in Waltzing Matilda blog.

Social media, like any field, comes with its own vocabulary. I don’t mean RT and PM and YOLO (LOLCATZ!), but the words people working in an industry use to describe the job they do. These words, specially coined to fit a very specific purpose, are sometimes helpful and often maddening, if you’ve got strong feelings about, you know, grammar and meaning. (My favourite example of business speak was being asked by someone to “travel the idea and revert to me by COB.” What was wrong with “think about it and get back to me by the end of the day”? Only he could tell you. But then you might not understand the answer. It’s a vicious circle.)
But leaving that calmly to one side, it’s certainly useful to be able to decipher the vocabulary if you’re venturing into a new world, and as social media is rapidly becoming part of more and more people’s jobs within international/organisational communications, we thought that it might be useful to provide a basic lexicon for 10 social media terms that you may often find yourself hearing and using.

This is what used to be called moderation, but with a little more… love… thrown in. END_OF_DOCUMENT_TOKEN_TO_BE_REPLACED

Facebook users will be able to include hashtags in their posts and then watch them become clickable. When a hashtag is included in a post, clicking on it will pop out a feed that aggregates others posts that have been tagged with the same phrase.

After last year Apple vs Samsung case, I wonder if social platforms should be able to copyright their exclusive features.  Would this turn into a patent war among #socmed giants (and dwarfs)?

This article was also published on Waltzing Matilda Blog

Everyone likes ranks especially when ranks are about you. We love to see how good we are at what we do compared to other peers. On Twitter,  some of these ranks relate to the number of new followers you’ve received over a certain period of time, the number of tweets sent out, milestones that have been reached, number of retweets, etc.  One of the most used tools to get a quick look at such stats and aggregate these numbers is Twitter Counter.

With Twittercounter users can create spreadsheets of their stat data, receive updates on an hourly basis, go back in history and review stats up to 3 months, and more. The free features you receive with the tool also provide useful information such as determining your flow of followers and the growth on your page. In particular, you are also able to display specific days people followed and un-followed your account and predict amount of potential followers to gain or lose in a day or more depending on how the graph flows.

To Twittercounter’s credit, there are two useful features to get a better sense of how your account is performing: 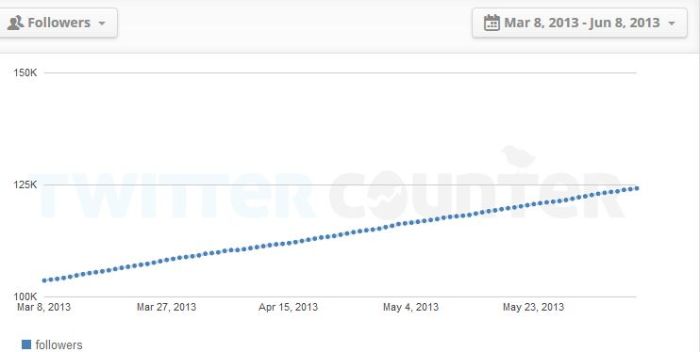 END_OF_DOCUMENT_TOKEN_TO_BE_REPLACED

“It’s all Twitter’s fault” said Turkish PM Emine Erdoğan on Saturday 1 June following the protests that spread around the country. “There is now a menace which is called Twitter. The best examples of lies can be found there. To me, social media is the worst menace to society.”

Twitter has indeed become an important communications tool for political protests and certainly the events of the Arab Spring, especially in Egypt constituted a tangible proof of that.

In Turkey, especially in large cities, almost everyone has at least one cell phone, and many of them are Internet enabled. (You must provide your citizen ID number to get one which also means that the surveillance capacity is also broad although the amount of data means that the surveillance is likely targeted rather than just broad and random). Facebook is very common, with more than 30 million users. (It’s in the top ten worldwide).

About 16% of the Internet population also uses Twitter and, as in here, Twitter is very important exactly because who those 16% are. In fact, probably more important because it is not everyone and creates a somewhat more exclusive space though that is eroding (Source: technosociology).

Overall, the social media response to the protests has been staggering. Between Friday and Saturday, at least 2 million tweets mentioning hashtags related to the protest (#direngezipark, #occupygezi, #geziparki) were sent. At one point, more than 3,000 tweets about the protest were published every minute.

While mass media are often censored during large-scale political protests, Social Media channels remain relatively open and can be used to tell the world what is happening and to mobilize support all over the world. From an analytic perspective tweets with geo information are especially interesting.

According to Benedikt Koehler, ”Turkish Spring” or “Turkish Summer” are misleading terms as the situation in Turkey cannot be compared to the events during the “Arab Spring”. I agree with the author both in substance and on an analytical point. The movement in Turkey is the very first protest movement in the Middle-East where we can see two channels that are widely recognized for two very specific goals: demonstrating solidarity and coordinating the protest.

#occupygezi has been used mainly to express solidarity and raise awareness. See the mapping of the hashtag below. The use of this hashtag is global and between 1-4 June almost 2 million mentions of #occupygezi have been recorded.

It is true that there is also a Twitter account called #occupygezi with currently over 17000 followers but people are mostly using the hashtag to get info about the outcry.

On the hand #direngezi is used mainly used coordinate the protests but also to raise awareness and live commenting. As you can see from the map below, mentions of #direngezi mainly occur in Turkey and the MENA area.

This video displays all geolocated tweets related to the #occupygezi #direngezipark protests in Istanbul, from May 31 to June 3, 2013[1].

It shows the high volume of activity on Twitter over this period, and how the protest started in Gezi Park but then spread to the entire city in the matter of hours[2].

In addition to being a tool for reporting, Twitter has allowed activists to share information about resisting police brutality. Under the Turkey subcategory on Reddit, a user posted an Occupy Wall Street guide to defending against teargas for Turkish activists.

#occupygezi sets a precedent for social media activism. It certainly represents a development from the lessons learnt during the Arab Spring and highlights the need of central coordination for digital activists.

This article was originally published in Waltzing Matilda Blog

It is true. Beethoven used the # to compose his immortal music and certainly wasn’t doing so with the intention of joining a Twitter chat or to check what people were sharing in the Hapsburg Empire in the late 18th century. He also had the choice of using other musical keys ♭ or ♮ and he knew how important it was to find the most suited to his music.

Memes apart, whether you are working on your next digital campaign, trying to attract buzz towards your latest online event or simply spread a message it is essential to create the best hashtag to achieve your goal simply. As bizarre as it sounds, hashtags are becoming an integral part of our lives. Just think that, the American Dialect Society crowned “hashtag” the word of the year, the French Commission Générale de terminologie de néologie recently adopted mot-dièse as an official new word and one couple even went as far as naming their child Hashtag…it is such a global social world.

Every hashtag has its own purpose and it is not a waste of time to investigate how you can optimize it. In the Social Media Team at DG COMM we often have to go on a “hashtag creation journey” where we gather for brainstorming sessions filled with question marks, possible scenarios, predictions and white boards full of suggestions. Nevertheless, at the end of the day there has to be only “one hashtag standing” (or maybe two). By thinking backwards to our most recent brainstorms, I could identify a few main principles we tend to stick to while forging a new hashtag, Namely, these are:

What will the hashtag be used for and who will be your target audience? As advocated  in a previous post, audience segmentation can  help you understand to who you are communicating  to and how your target audience behaves in social media. This should be a two steps process:

Firstly, think about what you want to achieve. Are you looking for buzz, to gather a specific community, get scientific feedback, get your word out, be viral, etc…?
Secondly, think about who you want to target. Are you hoping to involve everyone, a few selected journalists, experts, pundits, etc…?

These questions largely depend on your target audience. If they are part of a small special interest group and are interested in closed conversations, creating a viral, trending tag would not be a priority so much as creating a tag that works well for the group members.

Always cover your angles. Before you settle on a hashtag, consider whether there might be any negative fallout. Even if the hashtag has never been used, it could be “owned” in the sense that it is already a common phrase familiar to others and being used in a context unrelated to your digital activity. If your hashtag is unintentionally offensive or inappropriate (also in other languages), it is unlikely to generate the outcome you look for.

Nothing kills a conversation quicker than running out of space. Don’t choose a long hashtag. There is not an ideal size for a hashtag but think how every character you’re using is one character less than the 140 you have at your disposal. i.e. #thisimyawesomenewhashtag will get you somebody’s attention but will kill the engagement. Less than 9 or 10 characters should do it.

It’s interesting to use initials, acronyms and abbreviations to keep your hashtag short. This works especially when your audience is already familiar with such form of shorthand like our recent #EUDeb8 or occasionally adding in the year like in #EYC2013.

Keep your goals in mind. Your hashtag will be promoted via other channels than your social media platforms. Whether you intend to use it continuously or intermittently it is good to consider how linked to your identity it is. Make sure your hashtags work as reflection of your long and short-term goals. Nevertheless hashtags are a user-generated feature of Twitter. Once you have your “newborn”, be ready to promote it via your traditional channels too and think of it as the “plaque” all users will identify YOU with.