In 2012 there has been a visible positive trend within the engagement of Brussels-based think tanks on Twitter. Here is an attempt to assess their performances.

According to European Agenda there are some 64 think tanks in Brussels. However, in this study I present findings from those participating in the next Brussels Think Tank Dialogue on 22 April 2013 (With the exception of Egmont, Royal Institute for International Relations that does not have a Twitter account.

This data has been processed via Twitonomy. I envisage to provide a more global and comprehensive report on the full list of Brussels-based think tanks in the future.

From the table below you can see how Bruegel is the most followed profile (11184 followers), SWP gets the highest retweet rate (83.06%) while Bertelsmann Stiftung got so far the highest number of absolute retweets (10493). Friends of Europe is the think tank which is listed the most (285). Let’s now have a look at the full ranking by followers: 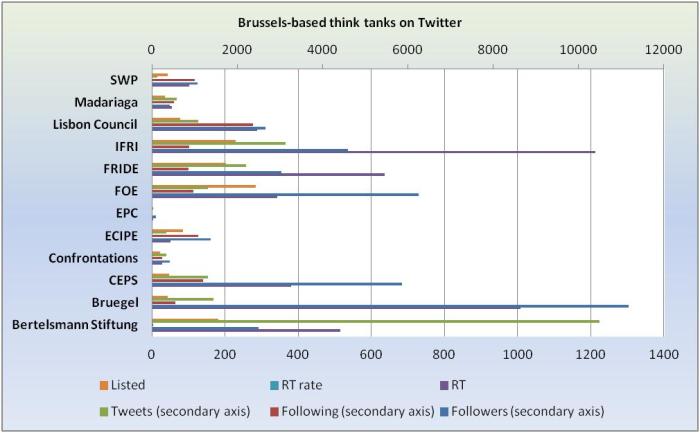 [1] At this regard, I did ask EPC to clarify their position on that (See here). Still, a response is awaited

Table 2 Brussels think tanks on Twitter ordered by opening date from the oldest to the newest. 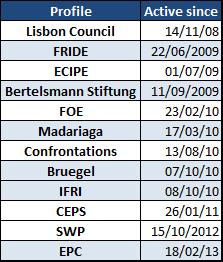 Table 3 Brussels think tanks on Twitter ordered by tweets per day (total number of tweets divided by days of activity) from the highest to the lowest value. 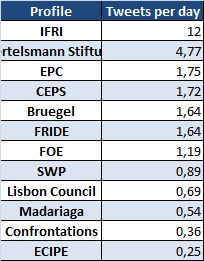 2 thoughts on “Brussels think tanks on Twitter: a performance ranking”