Followers aren’t everything, as I have already advocated in a recent post discussing the presence of the European Commission on social media. However, this ranking gives you an indication of the popularity of certain world leaders on Twitter in comparison to others.

Out of the 28 heads of states in the members of the European Union, 16 have a personal presence on Twitter. These people have a presence on Twitter independently from their position. David Cameron will always be Mr. David Cameron even  after his mandate as British Prime Minister will be over and the same applies for instance to Francois Hollande. Some governments such as Greece and The Netherlands use an account for their Prime Minister regardless of who occupies this position. In the case for instance of Italy, you can see both the account of newly elected Prime Minister Matteo Renzi and of whoever sits at Palazzo Chigi although in this case the account is basically the voice on Twitter of their press office.

I assume that the choice around which Twitter strategy to adopt depends partly on the political system. In fact it wouldn’t make much sense to implant the Dutch approach in Italy which is de facto the most unstable political system in the world (62 different governments in 68 years).

With no further ado, here is the ranking of European Heads of Government with a personal presence on Twitter ordered by Twitter followers (data as of 05/03/2014)

Newly-“elected” PM Renzi is by far the most followed European Head of State with 931K followers, followed by Monsieur Hollande with 613k and David Cameron with 608k. I say “elected” between quotation marks because I was not particularly happy with the way the new government was appointed.

Fake followers represent a common threat for the popularity of public and political figures on social media. I made an analysis based on Fakers, a tool that detects the amount of fake followers an account has. Here are the results by net followers. You can’t really prove and be 100% sure that somebody has bought fake followers. However, when you get very high rates of fake followers (like in the first 4 cases listed below) the question is at least legitimate but not assetive.

This point is quite interesting in the Italian political sphere where former comedian and current leader of the Movimento 5 Stelle Beppe Grillo largely bases his political campaign on his “alleged” digital popularity. The truth is that only 9-6% of Mr Grillo’s 1.4 million followers as considered “good” by Fakers. Anyway, here is the ranking.

Polish PM Donald Tusk‘s followers are fake by 62%. Matteo Renzi follows with 43% and Belgian Prime Minister Di Rupo is just behind with 38%. 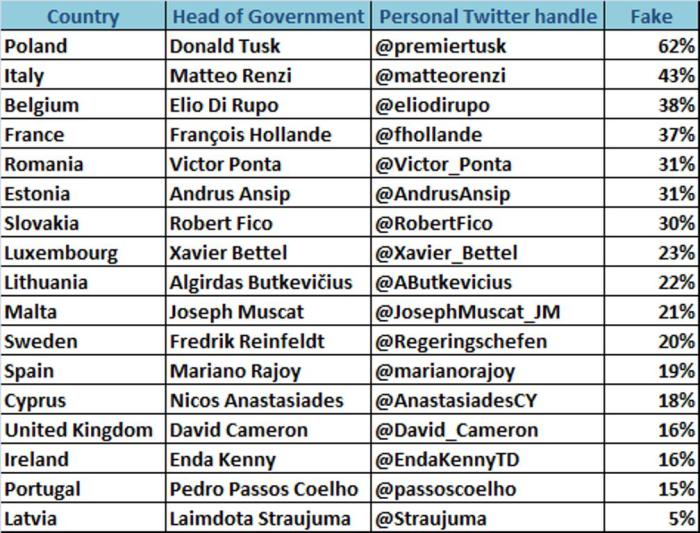 Here is the ranking of the accounts ordered by their percentage of net followers. Fake followers don’t seem to have changed the order in this ranking.

Klout is the first company really to nail down a measurement algorithm and to assign a number to people based on their perceived social influence. . Read more about it in one of my previous articles. Here is the ranking of European Heads of Government ordered by Klout score

As we can see, David Cameron displays an impressive score of 92, followed by Hollande with 88 and Di Rupo with 87

Thanks to Twiplomacy, I found out that @zoranmilanovi, @regeringschefen and @abratusek are fake or unofficial accounts. The tables have been updated accordingly.