@marcoRecorder
I bumped into this app a few days ago. A totally zoomable, totally clickable collage of every single person on Facebook, all 1.27 billion on them…including us! You can get directly to people’s page, which is kind of scary, but I suppose it’s like a phone directory. Faces of Facebook is aggregating the profiles of every user to give a birds-eye view of the social network. Here is what The Guardian says about this app.

Do you ever wonder about the first person to join Facebook after you? Probably not, unless you and a friend clicked the sign-up button at the same microsecond, in some weird social-network-based ritual, you’ve likely never met the person. Nor have you ever seen the face of the thousandth person to join the site, or the ten thousandth, the millionth or the billionth.

But once you’re given the opportunity to find those people, it can all get strangely compelling.

That’s what’s weirdly compelling about this new app which uses the site’s API to deliver, ostensibly, every profile pic on the site in one gigantic wall of colour.

The site was created by Natalia Rojas, a US-based creative technologist, and doesn’t actually show every user at once, of course. A conservative estimate of the size of every profile picture on the site is 30 terabytes (that’s 30Kb per picture multiplied by a billion users), and downloading that over the fastest residential connection in the UK would take a little over a week.

But if you hover your mouse over the shining pixels making up the backdrop of the site, it tells you the user number you’re hovering over. If you zoom in from there, you can see that user’s profile pic, as well as those of the hundred or so next to them on the wall of faces. 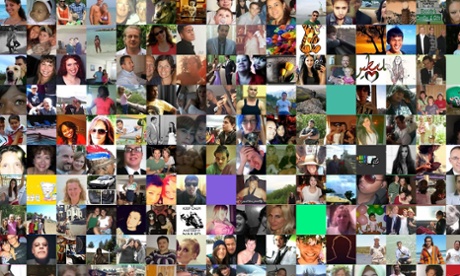 Zoom to the top left, and you’ll see Mark Zuckerberg at pride of place with user number one. Zoom to the bottom left, and you’ll find (apparently) the most recent person to sign up to the site – though they don’t retain that title for long, as the big number in the centre keeps incessantly ticking up.

Spend enough time zooming in and out, in fact, and you can see every arbitrary milestone you care to think of. And if you hook the app up to your own Facebook profile, you can see where you come in the rankings, and finally meet your digital neighbour. However, we’re unlikely to learn anything useful about the extent to which Facebook’s signups have slowed down, or what proportion of users have abandoned the site.

And sadly, the site is struggling to cope with the number of people trying to reach it at the moment, having gone from a niche art project to a worldwide success in a little over two days. But when it comes back, see who you can find.