I was very pleased to be invited at the DIGICOM Final Event – Sharing Landmark Achievements in Communication and Dissemination to discuss a topic that especially in the modern times of post-truth, false news and high polarization of the institutional and political debate in Europe, is of the utmost importance for communicators and all those involved in producing and putting together statistics and official data from public and private organizations.

I myself am not a statistician and certainly I don’t have the level of competence and knowledge most of the people in the room had in this field. I am a communicator and I have helped and coached institutions, politicians and public officials in doing something different than what they did: getting messages across to others.

When I was contacted to give this intervention, the drafted title for this keynote was “Communicating official statistics effectively” and so I started read the relative literature on the topic including for instance the report “Communication of statistics in post-truth society: the good, the bad and the ugly.”

Thus looking at the work of Eurostat and other organizations in the field, I realized that a lot is already available in relation to communicating statistics. What is missing though; apart from some very interesting analyses, mostly from journalists, public speakers and sometimes some very dedicated politicians with a passion for truth and democracy, is a set a serious warnings about the dangers of ineffective communication of statistics, which then became the title of the intervention. 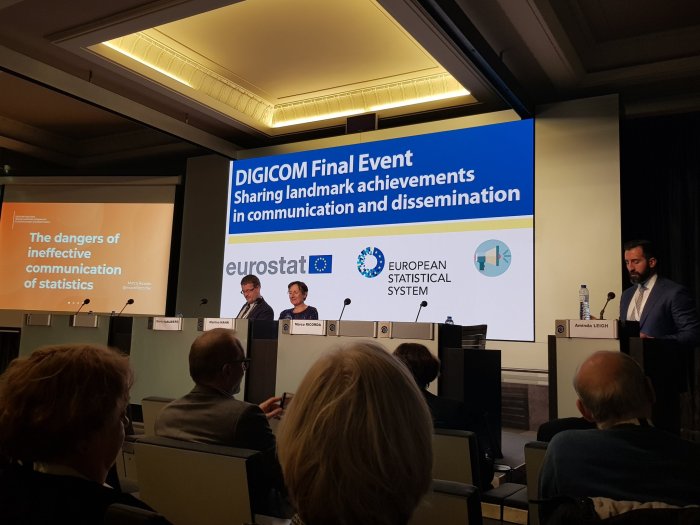 Why the reverse language? Why is it different to address good communication vs the dangers of bad communication? It’s the feeling that this triggers. Sentiments related to fear, concern and worry trump positive emotions and get more attention from any kind of audience. As a political communicator, and an open believer in a “United Europe”, I looked at the challenges that democratic institutions have had to face over the past few years. This is why, at the very last moment I have decided that my intervention should focus on this danger.

With the non-stop proliferation of social networks and digital features that spread information and content at a pace that was just unthinkable a few years ago, there is a strong need for the statistics community to modernize by accepting the importance of effective communication strategies and embody them as an integrated part of the statistical production process. The power of statistics is directly proportionate to the way they are communicated.

The ability of statistics to accurately represent the world is unfortunately in decline. A new age of big data controlled by private companies is taking over and is challenging democracy as well as the value of statistics. In theory, statistics should help settle arguments. They should provide stable reference points that everyone – no matter their politics – can agree on. Yet in recent years, divergent levels of trust in statistics has become one of the key schisms that have opened up in western democracies.

Shortly before the latest American presidential election, a study in the US discovered that 68% of Trump supporters distrusted the economic data published by the federal government. In the UK, a research project by Cambridge University and YouGov looking at conspiracy theories discovered that 55% of the population believes that the government “is hiding the truth about the number of immigrants living there”.

According to the Eurobarometer an absolute majority of European citizens do not trust statistics. These results are critical and follow a continuous declining trend, which, if not reverted, will have significant social consequences, as the gap between citizens and citizens’ trust in public administration and international institutions widens.

This trend is amplified by the deficiency of citizens’ knowledge of basic statistics literacy.

More worryingly recent reports on the perception of migration in Europe shows a very deep divide between reality and sentiment of society.

It is as if the era of evidential argument is ending and now knowledge is increasingly delegitimized and scientific consensus is dismissed.

The declining authority of statistics – and the experts who analyse them – is at the heart of the crisis that has become known as “post-truth” politics. And in this new situation, attitudes towards quantitative expertise have become increasingly polarized.

On one hand, grounding politics in statistics is elitist, undemocratic and oblivious to people’s emotional investments in their community. It is just one more way that privileged people in Brussels, Washington DC or London seek to impose their worldview on everybody else.

On the other hand, statistics are quite the opposite of elitist. They enable journalists, citizens and politicians to discuss society as a whole, not on the basis of anecdote, sentiment or prejudice, but in ways that can be validated. The alternative to quantitative expertise is less likely to be democracy than an unleashing of tabloid editors and demagogues to provide their own “truth” of what is going on across society.

Is there a way out of this polarisation? Must we simply choose between a politics of facts and one of emotions, or is there another way of looking at this situation?

Over the past few years, especially when it comes to understanding some pretty exceptional events, communication experts have often discussed and raised the issue of the power of emotions and the facts vs feelings dichotomy. Sentiment, perceptions, attitudes, unorthodox claims not based on actual numbers, play a bigger role than statistics in both politics and policy making.

While I accept it for politics, accommodating or appeasing electoral tendencies via the implementation of sentiment-based, rather than evidence-based policy making, is destructive, and as a pro-European, I don’t find myself particularly proud or at ease with recent policy actions undertook by a number of European governments in managing the economy, climate change or migration.

But now let’s talk communication. What seems to be clear from some of the most recent challenges for the European Union, the economic crisis, Brexit, migration, the current state of “evidence-based only” public communication is not working.

This doesn’t mean suggesting the dissemination of lies or half-truths, but it means to consider 4 macro factors:

THE POWER OF EMOTIONS

Facts don’t speak for themselves. Framing, metaphors and narratives need to be used responsibly if evidence is to be heard and understood.

We can’t separate emotion from reason. Better information about citizens’ emotions and greater emotional literacy could improve policymaking. Values and Identities drive political behaviour but are not properly understood, debated or considered. Before a set of statistics can be used, it must be made understandable to people who are not familiar with statistics.

The key to the persuasive use of statistics is extracting meaning and patterns from raw data in a way that is logical and easy to demonstrate to an audience.

Let me give you a couple of examples of people that took the visualization of relations and meaning to the next level.

Hans Rosling, was a Swedish physician, academic, and public speaker. He was the Professor of International Health and co-founder of the Gapminder Foundation, which developed the Trendalyzer software system. He held presentations around the world, including several TED Talks in which he promoted the use of data to explore development issues. He is the author of international best-seller Factfulness.

Geoff Ainscow, one of the leaders of the Beyond War movement in the 1980s, gave talks trying to raise awareness of the dangers of nuclear weapons. He wanted to show that the US and the USSR possessed weapons capable of destroying the earth several times over.

But simply quoting figures of nuclear weapons stockpiles was not a way to make the message stick. So, after setting the scene, Ainscow would take a BB pellet and drop it into a steel bucket where it would make a loud noise. The pellet represented the bomb that was dropped on Hiroshima. Ainscow would then describe the devastation at Hiroshima.

Next, he would take 10 pellets and drop them in the bucket where they made 10 times as much noise. They represented the nuclear firepower on a single nuclear submarine. Finally, he poured 5,000 pellets into the bucket, one for each nuclear warhead in the world. When the noise finally subsided, his audience sat in dead silence.

That is how you put statistics into context and trigger emotions.

Statisticians deserve a lot of credit, but before convincing other people to acknowledge that, they have to do it themselves first.

In my experience in coaching scientists on performing effective communication, I often felt there was a lack of self-acknowledgement. As a statistician you’re not simply putting data together, you are shaping society, and you are making people realize things.

Safeguarding the facts and figures and facilitate the use of good quality statistics for evidence-based policy making contributes to sound and sustainable policies for the collective benefits of citizens.

Self-reward and empowerment must start from you. Acknowledge your role and be proud of what you bring to society.

One of the biggest challenges faced by any collaborative statistician is communicating statistical information to those with less knowledge of statistics. As statistics is a core ingredient of transparency and accountability of institutions, it needs to be proactively rendered to citizens with quality and understandability.

When it comes to communication to different audiences, sometimes we are too fast at agreeing and patting each other on the back in a closed room full of experts but we tend to focus on communicating to the very few rather than the vast majority. I have certainly been a culprit of that.

We are so used to resorting to statistics that we tend to bombard our audiences with too many mind-numbing numbers. Statistics are rarely meaningful in and of themselves. Statistics will, and should, almost always be used to illustrate a relationship. It’s more important for people to remember the relationship than the number.

Audiences are not a monolith but mostly a conglomerate of infinite sub-audiences. Look at how they behave, where they are and consume content.

INVEST IN REBUTTAL AND FACT-CHECKING

Your work doesn’t end with the publication of your data-sets. Keep monitoring what people say about the data you publish, make sure, if you can, that no misinformation is spread and if not, rebut.

Many ask me in my intervention to provide solution against disinformation. It doesn’t get any easier than that and it’s up to institutions to decide how much budget and resources to dedicate to that.

I feel that today the information vs disinformation battle is not about being smarter but being bigger. We (Europeans and euro bubblers) often self-flagellate for our alleged inability to communicate. I think it’s time to stop this narrative.

THINK ON THE LONG TERM

Contrarily to the current perception of things, the construction of visibility, relations, brand is a long-term game and the underestimation of this (thinking that is a short-term game) is in 99% of cases the reason for public communication failure.

A post-statistical society is a potentially frightening proposition, not because it would lack any forms of truth or expertise altogether, but because it would drastically privatise them. Statistics are one of many pillars of democracy.

The experts who produce and use them have become painted as arrogant and oblivious to the emotional and local dimensions of government. No doubt there are ways in which data collection could be adapted to reflect lived experiences better. But the battle that will need to be waged in the long term is not between an elite-led politics of facts versus a populist politics of feeling. It is between those still committed to public knowledge and public argument and those who profit from the ongoing disintegration of those things.

This is a serious danger and something that you have the chance today to reverse. Don’t miss that chance.