After watching a video interview with Quag inventor Luca Giorcelli, I wanted to know more about this made-in-Italy social network in order to understand the process that led the company from a simple idea to a very innovative start-up

Quag calls itself a “useful social network based on your interests” and lets you work together with those who share your interests, to solve major and minor problems, learn new things and emerge as an expert. Here is an interview I had with Luca.

What is Quag? How did the idea start?

The dichotomy between “friends” and “interests” creates the void Quag intends to fill, as a social network useful for clearing doubts, learning new things and experiencing the pleasure of sharing our knowledge.

Some people define you a “social search engine”. Do you agree with this definition?

Quag is an interest-based social network; it is not a search engine.  Quag does, however, have an elective affinity with search engines, and more generally with all the environments searches are made in. The reason for this is simple: each time we become interested in something, we are likely to conduct a web search, either in search of information or because we are undecided regarding which product to buy.

This is why we have released Quag-in, an add-on for Chrome and Firefox that comes to your aid when search results are insufficient.

At that time you’d like to ask someone for advice, but you give up before you even start, because your Facebook friends can’t help you and making your way into a forum is hard work. Quag-in simplifies things by allowing you to:

Given its functions and the environments it operates in, Quag-in can be defined as a social search and social commerce (or social shopping) solution. 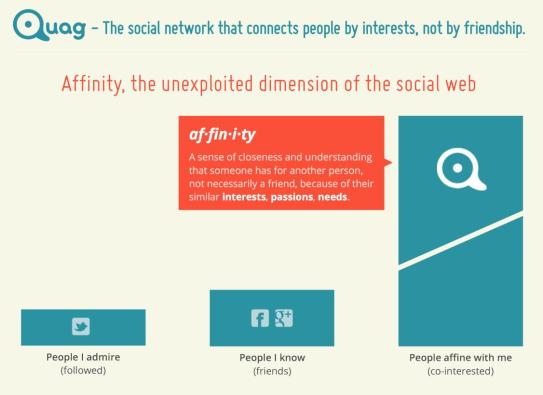 What is the difference between you and Yahoo answers and other similar services? Is there a difference?

Quag is a social network with a proprietary technology that Yahoo Answers does not have: the interest graph, which recognises users’ interests based on their behaviour, and creates significant connections between them. The Quag interest graph is semantic, and it avoids the fragmentation of systems based on tags or categories, automatically linking up people with related interests.

In practice, when you ask a question on Quag, for instance a question on “Star Wars”, notification of your question is sent via e-mail to the other people interested not only in “Star Wars”, but also in related concepts, such as “Darth Vader”, “Luke Skywalker”, “Han Solo”, “George Lucas”, etc. Quag therefore offers a potential for connection and relevance that is greater than that of systems based on general categories (e.g. “cinema”), such as Yahoo Answers. Connecting people based on common interests is an essential pre-requisite for obtaining quality contributions, which are difficult to obtain from pseudo-general systems, based on a limited number of categories with a wide scope of meaning. 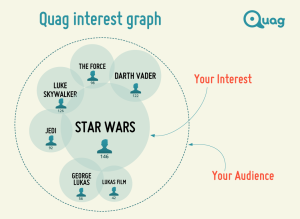 In addition, Quag has an interaction model that is different from traditional Q&A, because the aim is to leave more room for interconnection between people. We believe it is lively discussion that generates knowledge, providing greater depth and gratification, rather than the question itself.

What are Quag’s sources of income?

To date, Quag has been funded exclusively by the private capital of its co-founder, because in Italy there are still people with the courage and the entrepreneurial skill to breathe life into a technological startup, investing their own money in it.

At the moment we are concentrating on improving the user experience offered by Quag, as is obvious for a startup founded less than a year ago. However, our business model will not be too different from that adopted by the various social networks, integrated with very interesting possibilities in the area of CRM (Customer Relation Management). A significant percentage of the discussions on Quag regard products and services of all kinds. Quag will be aiming to act as an ideal point of contact for companies seeking to establish a constructive dialogue with their customers, a dialogue that is open and respectful, subjected to the opinion of users, free of favouritisms, partly because our moderation algorithms leave no room for manoeuvre for anyone trying to act in ways that are not entirely transparent.

What are the main challenges for a project like yours in today’s internet and social media market?

The future is increasingly a network made up of interactions and processes between people. Increasingly value is placed upon affinity, a relational force at least as powerful as friendship; unlike friendship, however, this is territory as yet uncharted on the social networks, where it will become increasingly necessary to offer people the opportunity to connect irrespective of friendship bonds in order to create significant relationships.

We have imagined and created a type of interaction based on sharing knowledge, experiences and passions among people who do not know one another, but have common interests.

At the moment, Quag mainly covers Italy and questions posted in Italian? Do you plan on investing more on the internationalization of your product?

It’s right to begin locally, but with an immediate eye on the international market.

The projects created in Silicon Valley have volumes of attention from 20 to 40 times higher, and the speed at which they are able to reach the critical mass is much faster.

Quag was devised in Italian, but it is structured so it can also work in other languages.

Concealed behind simple interaction are complex algorithms Quag is innovating all the time. We have recently released a new “interest guessing” algorithm, the purpose of which is to identify users’ interests based on their behaviour – so not only what interests you but how much it interests you, and whether you’re an expert or you’re interested in learning more.

We are also ceaselessly working on “matching”, i.e. the ability to bring together interests that are related but expressed using different words, such as “privacy” and “data protection”.

The structure that will be created in this way will also make it possible to manage languages other than Italian, with a view to release in other countries; we are already working on the international version.

One thought on “Quag: not only a social search engine”