Following the Expo madness (it was positive madness and the best professional time of my life…) I needed to get some rest from everything. I needed some internet detox and more importantly some “people detox.” I have been an integrative part of the biggest event of 2015 with peaks of 270.000 visitors in one day…so to speak. Last minute, I bought tickets to Malta where I spent five days. I’m afraid they were not very productive and I basically chilled, slept and ate…yep

But still, it was pretty amazing and I will definetely be back.

END_OF_DOCUMENT_TOKEN_TO_BE_REPLACED

This summer I went on an amazing sort of Eurotrip along Berlin, Copenhagen and Stockholm. I had never been to any of these three cities and it was time to cross them out of my to-do list. In particular, I went on a quest to find street art around these cities. Overall it turned out to be a pretty awesome trip. I can’t remember the last time I had this much fun and met so many wonderful people throughout this relatively short journey.

In terms of street art and discovering the alternative part of the societies I was about to discover, I would like to take my hat off for the amazing work the people at Alternative Berlin walking tour do. This is not only a free tip-based tour: it’s the best I have ever done.

Taking you beyond the tourist destinations to the heart and soul of the city:

The underground sights & sounds, world-famous STREET ART and GRAFFITI culture, haunts and hangouts of the famous and infamous and the landmarks of rock, reggae, punk and electronic music.

What really made this tour special was the thoughroughness of the information, the explanation of the stories and the roots behind the origins of the current society in the city of Berlin. This wouldn’t have been the same without our awesome guide Jason. From Cali, 15 years in Berlin, and a true passion for this city. 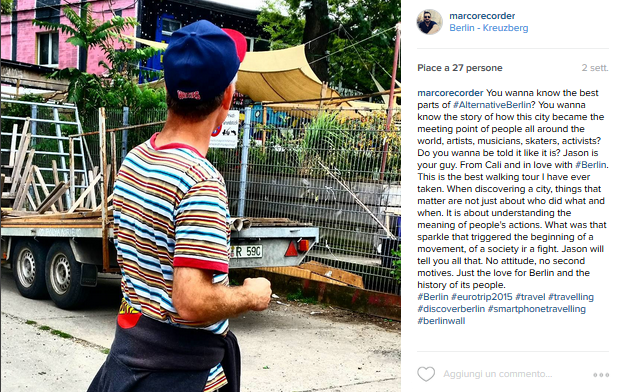 The tour was intense (+ or – 4:30 hours) but I haven’t felt bored once. The passion Jason trasmits when talking about the modern history of Berlin is captivating. You just can’t stop listening. History is made by the victors, they say. True. But it’s also made of a lot of unsual stories that you wouldn’t expect to read in a history book or an official city guide book. Jason knows a big deal of these stories. What happened on both sides of the Berlin wall, why a particular piece of street art has been placed in a specific place, what it meant for society at the time of its making, and what it means now. This is what I was looking for … and I found it.

At the very beginning, you are taken to the “RAW.” The postindustrial jumble of derelict buildings along Revaler Strasse is one of the last alternative compounds in central #Berlin. In its earlier life it was a train repair station, founded in 1867 as the ‘Reichsbahn-Ausbesserungs-Werk’ (RAW for short) and in operation until 1994. Since 1999, the graffiti-slathered grounds have been a thriving off-beat socio-cultural centre offering workspace for artists and creatives of all stripes along with clubs and bars, an indoor skate park and – in summer – a bunker-turned-climbing-wall with attached beer garden and outdoor cinema. This is a place with literally everything but each and every corner has its own story. You can’t miss it.

Moving on, I was really looking forward to see the work of El Bocho. The Berlin-based artist works with giant cut outs and installations, some up to 20 ft tall, which he then hangs up Berlin city walls during night time. The cut out here below is on a wall just behind the RAW area. Aside from using canvas he has recently started working with tiles. His newest experiment involves exposing poster paper to sunlight and precipitation, then adding color, before leaving it outside again to mesh with the natural surroundings.

After taking a short train ride, nearby Oranjestrasse we arrive at one of the greatest pieces of street art you can find in the German capital. Victor Ash made the Astronaut mural in Kreuzberg as part of the 3rd editon of the Backjumps Festival in 2007. Since then, the wall has become one of the street art landmarks of Berlin, together with the famous murals by Blu, Roa or Os Gemeos, all in Kreuzberg.

The visit obviously ends at the Berlin wall which came to symbolize the Cold War’s division of East from West Germany and of eastern from western Europe. About 5,000 East Germans managed to cross the Berlin Wall (by various means) and reach West Berlin safely, while another 5,000 were captured by East German authorities in the attempt and 191 more were killed during the actual crossing of the wall. In 2015 its power, its symbolism and iconology is a strong reminder of what “us Europeans” have managed to achieve in the form of the European union: peace.

I tipped Jason generously because it was a terrifici day and the expertise demonstrated throughout the tour was indisputable. Make sure you join this tour on your next trip to Berlin and do the same.

The boat from Ouranoupoli takes us to Daphni in about an hour. Dafni  is a small settlement on the southern coast of the peninsula between Xeropotamou Monastery and Simonopetra Monastery. It is basically where most travellers on the west coast of the peninsula can get food and whatever else they need before starting they’re journey.

From there, we went to Karies, the capital of Mount Athos. On the beginning was called “Mesi”, in the 11th century it was called “Lavra of Karies” and the 14th century, Skite of Karies. Today is a small village that has some houses, shops and few temples. Here is situated the building of Iera Kinotita (Holy Community), where the representatives of the 20 Monasteries meet. In front of this building stands the temple of Protato, the cathedral of Karies. There is kept the miraculous icon Axion Esti. Opposite the Protato, lies an ancient tower. Inside the tower is the library where is kept the first document of Mount Athos, written on goat skin and called “Tragos”.

As I explained in my previous post, transport is not easy in Agion Oros. After having a very quick look at Karies we need to rush back to Daphni to get our last boat to our final destination of the day. In Karies you find mini buses that leave whenever they are full or whenever they find somebody willing to share the 45€ ride (which is the price of any use of these mini buses). Fortunately, we find a group of Georgian pilgrims we can share the ride with and make it to Daphni back in time. We need to get to Docheiariou before they serve lunch since we know it will be the last real meal we’ll have in the next three days due to the fasting period the monks will undergo for Easter.

@marcoRecorder
When I was 14 or maybe 15 years old I remember being on the train on my way back from school. My high-school was quite far from home. I had to take two trains a get picked up at the train station every day to just get back home. Even though that wasn’t great (waking up at 6AM for 5 years straight was not the best memory of my adolescence) this daily travelling gave me a lot of time to read (whenever I was not sleeping

I still remember one time I was reading this reportage by an Italian journalist for Focus who went to Mount Athos, the holy mountain of the orthodox church. Since then, I got very keen on visiting the place and this is how I managed to do so over the last Easter break.

Getting there is not easy. Firstly, only 10 visas for foreigners are granted per day. Secondly, it’s not a place where you just go and find accommodation. You need an invitation from one of the 20 monesteries on the peninsula which can only be reached by boat.

I got all that sorted out with the precious help of my girlfriend and with the company of a Greek friend of mine without which my travelling would have been a lot more complicated.

We met in Thessaloniki and we drove for a couple of hours to Ouranoupoli where we needed to get our visas. Before embarking on the boat all visitors must have been issued a diamonētērion, a form of Byzantine visa that is written in Greek, dated using the Julian calendar, and signed by four of the secretaries of leading monasteries. Clergy of the Orthodox Church are required to obtain permission of the Patriarch of Constantinople.

For laymen there are generally two kinds of diamonētēria: the general diamonētērion that enables the visitor to stay overnight at any one of the monasteries but only to stay in the mountain for several days (more in winter, when there are fewer visitors, than in summer), and the special diamonētērion which allows a visitor to visit only one monastery or skete but to stay as many days as he has agreed with the monks. Well, at least on paper… When I was asked my religion I replied “atheist.” The guy at the office didn’t really like that and to cut a long story short I just asked him to put “catholic” on the document in order to avoid any further discussion.

So we get on the boat to Daphni where our short journey will be begin.