@marcoRecorder
I can’t remember the last time I have been so grateful to both life and karma at the same time. On the day of the Brussels attacks I was on my way to the airport to set off to Dubai.My flight was in the early afternoon and I was just packing up when I start getting drowned in whatsapp messages… I didn’t get it at first but when I turned on the telly I somehow realized what was going on. Obviously, plans changed and the state of shock I was in completely froze me.

As harsh as this sounds, I had to decide. Should I stay in a locked down city for a week or should I find a way to leave anyway? I managed to get my flight changed and had it leave from Amsterdam instead of Brussels. Now, getting to Schiphol airport was the problem. Nothing was moving. No trains, no buses, no taxis, no Uber, all rented cars were gone. I started to accept that I will have stayed in Brussels and that’s it.

Then, the most amazing things started to happen. I walk home and bump into my neighbour Andrea who works in the B&B just in front of my house. He was smoking a cigarette and I tell him my story.  I explained to him I was supposed to leave on that day but all national transports were shut-down. No trains, buses, taxis, everything. With no hesitation and without me even asking he said “I’ll drive you to Amsterdam.” I was in complete disbelief. I don’t know Andrea that well. I had just moved in the area a few months ago and we only crossed paths a few times on my way home during his cigarette breaks. I couldn’t believe such human and unconditional kindness still existed. He drove me three hours to Schiphol airport and when I offered to pay for gas he said “I don’t want anything in return. Just promise me that if someone will need your help someday you will do the same.” The respect I have for this man cannot be described with words.

I arrived to Dubai with an overnight flight and the second most incredible thing happened. I was a guest at a friend of a friend’s house, literally. I had never met Niya and Jeppe, the couple that hosted me during my stay.  They were the most genuine and wonderful people I have ever met. They showed the most amazing time in this wonderful place just out of their good heart without even knowing me. I will never forget this. 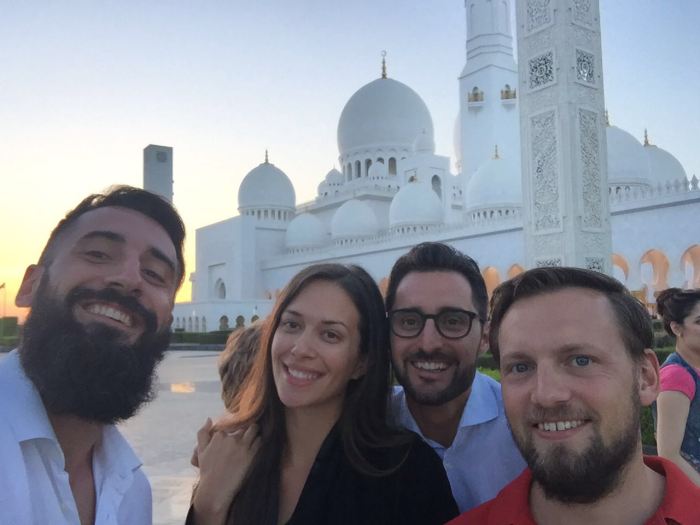 Sometimes karma manifests itself in mysterious ways. I try to be a good human no matter what life throws at me. Being grateful is the first step towards inner peace. I think here, this step was more like a giant leap.