Dana Manescu, team leader of the Social Media Team in the European Commission, had a terrific idea ahead of the next European elections which will take place between 22 and 25 March.

SloganEUizer is a crowdsourced database that collects all slogans used at the national level by political parties campaigning for the upcoming European elections.

“They say social media messages ought to be short and sweet. Let’s see how sweet are the slogans for the EP elections.” writes the author. This is a database continuously built by Dana and several enthusiastic contributors. Have you seen a slogan somewhere? Please share it! 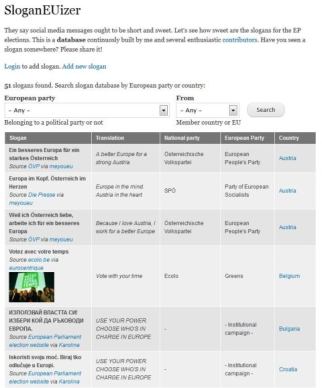 3 thoughts on “Crowdsourcing a database for #EP2014 slogans”